Showing posts from January, 2012
Show all

About Godless Bitches This is a podcast that I recently started listening to, and now that I have I am downloading and listening to all their back episodes. Think intelligent discussions (using reason) about feminism, atheism, politics, sex, all the good stuff.
Post a Comment
Read more

- January 30, 2012
So I'm participating in two Spring Challenges this year: I'm Hearing Voices and the A to Z Blog Challenge. You can check out information about these challenges by clicking on the links above, on my sidebar, or by visiting my Challenge Page! Looking forward to it!
Post a Comment
Read more 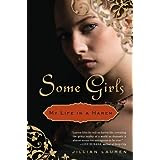 "Some Girls" written by Jillian Lauren is the story of one American girl's experience in a harem, during the early part of the 1990's. The story takes place in multiple locations: New York, suburban New Jersey and Brunei, the royal sultanate capitol of Borneo. When I see the word "sultanate" I immediately think of the middle east, Muslim culture, sand dunes and Bedouin tents, and while there's a nod to that kind of culture in the novel, Borneo is actually part of Southeast Asia, and some of the other women Lauren encounters are Filipino, Korean, Indian, etc. The book follows Lauren's journey from struggling actress and unpaid theatre intern (believe me, been there done THAT!) to working in an escort agency, to becoming a part of a handpicked harem halfway across the world. I know I've used the word "girl" and "woman" interchangeably, and that's been on purpose, because that's what I believe is part of the story here:
Read more

- January 15, 2012
For those of us who KNOW the real truth about what happens when we go to sleep. http://www.youtube.com/embed/SKVcQnyEIT8</a>" frameborder="0" allowfullscreen>
Read more

Writing Prompts and Predictions for 2012!

- January 01, 2012
Yay! First post of the year! Here are some predictions for 2012 that I've culled from the internet that also double as writing prompts. I got these from all over the place, but many were from Coast to Coast Am ( http://www.coasttocoastam.com For those of you who don't follow, here's my shameless promo of the show: It's a nightly radio show, which you can listen to live or via podcast, discussing everything from space and time travel, to aliens and bigfoot and ghosts to magic and psychic powers. Like I said, everything! Plus you get an added sense of being a part of this secret night community. Be a part of the cool kids'club and check them out! Be sure to follow me on Twitter to get your daily writing prompts! 1.A "very large object" will pass between the moon and Earth, turning the sky red and dropping rocks in its wake. 2.A significant buried treasure will be discovered somewhere in the United States. 3.A 5.0+ earthquake in mid-to-central Californ
Read more
More posts