Showing posts from November, 2016
Show all

The Ship of Myself (Depression, Part 1) 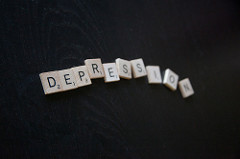 I started taking Prozac about a week before the election, when I was relatively optimistic about the election results. I never thought I’d look back on that as a time when I was relatively together. I recognize that depression is bigger than I am, and that I need help and intervention outside myself. I can only do so much on my own. I’ll post a list of some of the self care ideas I’ve been using shortly. I didn’t see it as a premonition then but now I wonder. I’ve always had a kind prescience about some things, and I really wonder if my consciousness was setting off some kind of: "Iceberg, right ahead!" warning before the ship of myself crashed headlong into destruction, ripping a hole in my heart enough o let me sink. I’ve always had issues with depression. I’ve been on anti-depressants before. I’m barely moving. The week after, I’ve at least regained the ability to go to work and act like a semi-functional human being. Wednesday the 9 th and Thursday the 10 th
Post a Comment
Read more
More posts